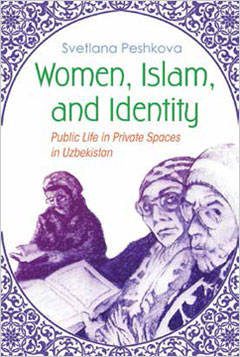 Women, Islam and Identity adds to the growing body of research on women acting for change from the margins. It brings into focus women who want to be ‘truly Muslim’ and must negotiate their pursuit of a life of faith within religious, social and government restrictions.

Svetlana Peshkova did her research in a valley outside of Tashkent in Uzbekistan. Her work spanned a decade, and itself had to negotiate the fragility of being a researcher in a former Soviet state where strict control of life, religion and the public image of the country is managed by an authoritarian state. Running across the start of each chapter is Peshkova’s story of confrontation with the state. She uses a part of her story to open up the challenges that the women she was interviewing faced. The relationship between the two is not always clear, and sometimes it appears that the writing of her own story is essential for her though not always for the book. However, her story does highlight the tensions in representing well the stories of those who open their lives to our observation and question.

This is a valuable book because of the insights it offers into women who want to understand and live their religion in the new freedom of a country that has emerged from domination by the Soviet Union. Women who had little opportunity to learn or live their faith under the Soviet era were keen to pursue religion in the new Uzbekistan, both as a source of their identity and a hope for community and national transformation.

We are introduced to several women in this book. Tursun-oi was a Communist and successful business woman who reoriented her life toward Islam and became a religious teacher and leader. Jahon wanted people to understand ‘correct Islam’ which she said was built on love toward others. Nainahon experienced a dream that changed the path of her life from business woman to devout Muslim, but then when confronted with choices about life, family and wealth made pragmatic compromises. These women ground the book and Peshkova’s exploration of self-formation and social change (the title of her first chapter but a theme of the whole book). The extended period of the research means that we see the vicissitudes of their negotiations with faith, life, society and government.

This book adds to other work that explore the way women engage their faith as new opportunities open up. These other works include Moyra Dale’s, Shifting Allegiances: Networks of Kinship and Faith (see the earlier book review https://whenwomenspeak.net/book-review/shifting-allegiances/), and Saba Mahmood’s, Politics of Piety: The Islamic Revival and the Feminist Subject. (see blog on Saba Mahmood https://whenwomenspeak.net/blog/remembering-saba-mahmood-re-understanding-the-womens-mosque-movement/) By broadening available research, Peshkova helps us delve into the way women interact with Islam and create new discourses of meaning. As with these earlier works, this book points to the way women are shifting understandings of Islam. This book notes how some of this is the result of growth in women’s education, something the other books also document.

There are a number of areas where these women are forced to negotiate their desires for faith and life. Peshkova points to way the prevailing political contexts shaped the early discourses of their education, traditions and dependence on the state, something that in reality is little different for them now, a point Peshkova seems to miss. The government may be different, but its control of the discourses of education, religion, traditions and the role of the state in community and individual life remains dominant. What we are given insight into is the different ways women go about those negotiations.

Tursun-oi began by acquiring the knowledge to read and interpret the Qur’an, but then it was a dream that created a strong connection with Sheikh Baha al-Din Naqshbandi and was formative in her religious experience. It gave her power to provide blessings. While some who receive this gift use it for profit, Tursun-oi was committed to not turn religion into profit. Tursun-oi seeks to negotiate under the radar, away from the questions and permission of the government. Others take the government test for accreditation as religious scholars, and then perform religious services for the community, and as part of the local government system. Others rename their classes so as to avoid limitations imposed by the law on forms of teaching.

Peshkova argues that all the while women are creating discourses on rights and duties that lead to social change. These may not be constructed in the language of rights or liberation, and be enacted within the restrictions imposed regarding their participation in public religious life, but they opened opportunities for articulating women’s needs in order to be ‘truly Muslim’. Peshkova describes these new discourses as reflective of the existential conditions of some women in Uzbekistan and the social world that orders their lives.

This book is useful because it adds to the genre of work exploring how women following Islam are renegotiating what it means to be ‘truly Muslim’. We can no longer assume that the standard texts on what Muslims believe articulate the way women are exploring and living life and faith. This work on Uzbekistan is a welcome addition to this growing body of understanding.

For those who seek to journey with Muslim women to share life and faith as Christians, works like this enable us to see how women experience faith and search for meaning in in the context of family, society and nation. This is their reality to which the Good News must speak.

Previous Post
Contextualisation of the Gospel: Towards an Evangelical Approach in the Light of Scripture and the Church Fathers
Next Post
Veil