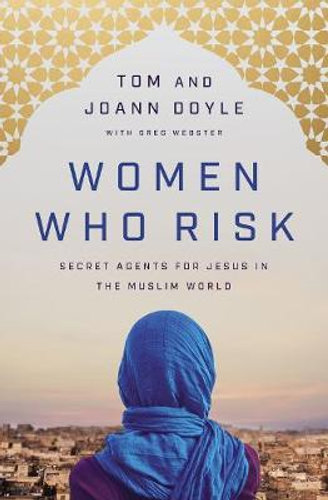 By Tom and JoAnn Doyle, with Greg Webster

This book tells the stories of eight Middle Eastern women of Muslim background, both single and married, who have become followers of Jesus.  Some are from Jordan, some Syrian refugees now living in Lebanon or Jordan, one from Gaza and one from Mecca.  They are all women from the Middle East, so the reader needs to exercise caution about too quickly assuming that the same details apply to all Muslim women in other parts of the world. They are stories of encountering Jesus, and of heroic courage in sharing their faith.  They are narratives which show Jesus’ miraculous guidance and provision in war-torn contexts, and of healing from jinn and from a deadly stroke. A number of the accounts tell of women in abusive marriages. Many of the stories relate people encountering Jesus personally: others come to Jesus through the testimony of believers, especially of other believers of Muslim background.

The authors describe women as the “spiritual gatekeepers” of their families (xix).  They quote a former imam who told them that “Passing on the Islamic faith to our children was not my job.  I read the Qur’an, I prayed five times a day, and I went to Friday prayers at the mosque. All the other stuff was left up to my wife.  She was the one who taught the children and trained them to be good Muslims. That was her responsibility, not mine.” (xx)  While this theme is not expanded on the book, it is a reminder of the significant role of women within Islam.

The intrepidness described in the women as they look at the cost of following Jesus, and even more of witnessing to Jesus, gives weight to the questions the authors describe asking ME Muslims exploring faith in the Messiah – questions that Christians of other backgrounds should all be ready to ask themselves, especially if they are considering working among Muslims:

The stories remind us of Jesus’ miraculous power and intervention, and of the fearlessness of women of Muslim background who commit to follow Jesus.  This makes the book an encouraging read for those working among Muslim women, particularly in situations of domestic abuse, war or other violence. The three implications or lessons that the writers suggest can be taken away from the testimonies of the women described, are a good reminder that:

We are to pray for miracles and expect them.

What about giving the book to others? One woman reminds us that ‘where you live, Muslims – especially women – want to be seen. … Reach out to them by simply starting a conversation. That will lead to a friendship that leads to sharing the amazing worlds of life Jesus offers.” (190-91) So if the book can be used to motivate Christians to share friendship and faith more freely, rather than reinforcing stereotypes of fear and negativity about Muslims, that is great.

For me, reading the book also raised some substantial challenges, particularly around what happens to the voices of women (and men) from non-western contexts, when they are presented for consumption by western readers.  How do we avoid colonising their voices or stories into our own storytelling style in order to accommodate them to an audience from the wealthy minority world – particularly if we are wanting to find publishers for the material?  How can we give majority world women and men more power over their own stories and how they are told or used?

This brings up the prior question of who is the primary audience for the women themselves? Why do they want to tell their stories?  It is clear from the testimonies in the book that for these women, other Muslims are their primary focus. So in what ways are they engaging with other Muslims? How are they telling them their stories, and through what forums? It might have been helpful to explore this dimension more.  It was good that one account included the partial account of how one woman made effective use of a pseudonymous Facebook account to witness anonymously, even to her mother in the next room. How is it possible for us to help women believers of Muslim background find their own voices, tell their stories their way according to the patterns of their own people, and find ways to promote them for the audience they want to write to, rather than accommodating their stories for our own books or courses? How can we displace ourselves and our own agendas, to give the right of space and place to them?

The book is a challenging and an encouraging read.  But perhaps its main value is in the questions it raises:  how do we honour these women, and their faith and courage, by enabling them to be the owners of their own stories, telling their stories in their own ways and genres, and to the people with whom they want most to share?

Extending the bonds of kinship
August 1, 2022