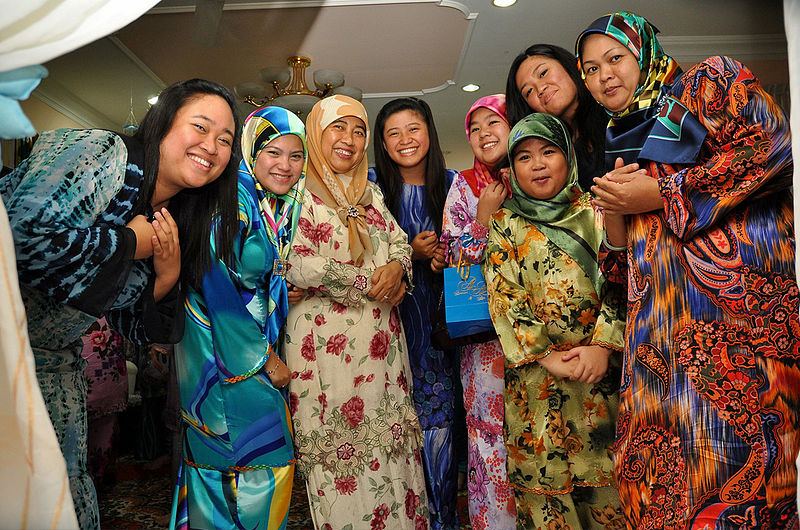 The room was full of women, with men also joining in on the edge of all the activity. In the centre the new baby, just a week old, was carefully wrapped and laid in the large decorated sieve. The women ululated loudly and one of them banged a brass mortar and pestle noisily, so that the baby would grow up brave even in the face of threatening sounds. The new mother carefully stepped seven times across the incense burner, as the smoke wafted through the room, as protection from the evil eye. The grandmother took the sieve, shaking it horizontally, telling the baby to be obedient to the family. And then it was carried through the house, with one of the group scattering salt or rice as they processed round the area, for protection or prosperity. Afterwards the extended family and guests sat together, enjoying candy and nuts together with the mughat[i] drink, given to help the new mother in breastfeeding, and served to all those who attended. This was the Egyptian seven-day celebration after a baby’s birth, to name the baby, keep away the evil eye, and make sure the child grows up brave and obedient.

Rites of passage (also called rites of transformation) are rituals that recognize transitions in the life cycle, most often around birth, puberty, marriage and death. The ritual is a ceremony that helps the individual and family successfully negotiate life transitions, and mark the change in the individual’s social position and relationships. Arnold van Gennep first developed the term, suggesting that it can involve three phases.

Every community has rites of passage. Some communities observe them with formal rituals more than others. Rites of passage in Muslim communities may include times such as at birth (like the seven-day ceremony described above), at circumcision, when the whole Qur’an has been memorised, when a girl puts on the hijab (often at puberty), at marriage, and at death.

The place of women

It is at rites of pass age that women often take central place. Muslim women are sometimes described as ‘marginalised’ in society. Perhaps it is truer to say that we find them presiding at the doorways or boundaries of life transitions (somewhat like Janus, Roman god of transitions, who is often pictured with two heads as he looks to the past and forward into the future). Muslim women use the symbols and rituals that invoke divine blessing to help family members negotiate the often dangerous crossings from one life stage to another.

What are some of the roles that women play in rites of passage? At birth women are in attendance, when even fathers may not be present. At male circumcision, women can be the ones who are celebrating, with dancing, music and sweets.[ii] While it is men who sign the official marriage certificate in the mosque, it is women in the family who are usually the ones involved in negotiating and deciding which girl is an appropriate bride for their son or nephew or brother. And the mother of the bride may visit the newly married couple to ensure that consummation has happened successfully. Mothers are more often the ones accountable for children succeeding in school. At times of sickness, women take responsibility to care for family members. At death, women wash the bodies of women who have died. Sarah Mullins suggests that:

In rites of passage where women have authority, they play a crucial role in how families go through times of transition or crisis.

Rites of passage involve someone becoming a new kind of person. The rituals reflect the kind of person that is emerging, with the attributes that are desired for them in their new stage of life. As rituals develop or are adapted, they show the kind of values that people want to hold on to. In the seven-day ceremony described above, the model child will be brave and obedient. In both the Old Testament and Islam, circumcision carries the meaning of purity, and belonging to the community. Both these meanings are included in baptism. And baptism also takes up the theme of death and new life, and men and women being equally made members of the new community. One of the reasons that Christian weddings have such an evangelistic impact may be how they honour the woman together with the man. Rituals around death link to beliefs about the nature of the afterlife and how we enter it.

Rites of passage and discipleship

Many in the west have grown up wary of rituals, viewing them as meaningless and formulaic. However in much of the world important decisions and transitions are marked by rituals that are performative (in the way that a marriage ceremony actually changes the legal and social status of a couple). Rather than rejecting rituals, we can seek to ensure that the rituals and symbols are relevant and meaningful in what they express and enact.

Rituals around rites of passage are an important part of discipleship. This is partly because they symbolise and thus help evoke the ideal attributes of the individual in their new status or identity. Hiebert describes rites of transformation as:

“like remodelling houses. We must tear down parts of the old to give rise to the new. We must move through chaos to reach a better order. … Without living rituals, we have no appropriate ways to affirm our deepest beliefs, feelings, and morals, which lead to new lives in a new community and the world.”[iv]

They are also important because enacted rituals and symbols allow the meaning to be taken up at every level of our being, physically, intellectually and emotionally. Ronald Grimes suggests that rituals go beyond intellectual assent, in being able to drive meaning ‘deeply into the bone’.[v]

Rites of passage can enable both the individuals and their community to recognise and give expression to the transformation that is happening in significant transitions at every part of life.