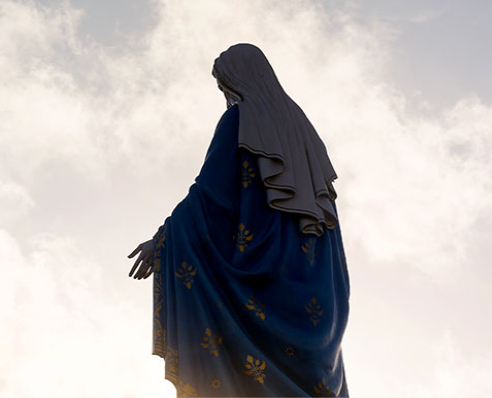 We noted in the previous blog that the name of the third surah of the Qur’an, Al-‘Imran, is the family of Maryam. It includes the account of angels’ message first to Zakariya, and then to Maryam telling of the son who would be born to her. In this surah Maryam is described as chosen and purified by Allah and ‘chosen above all women’ (Al-‘Imran 3:42).

Surah 19 is named after Maryam herself. All the other surahs that carry the names of individuals are names of prophets. Maryam is also included in the list of prophets in Al-Anbiya (Prophets) 21:48-91. Surah Maryam follows on from the revelations which were described in Al-‘Imran, with the account of the birth of Yahya (John the Baptist) and then of the miraculous birth of ‘Isa (Jesus) to Maryam. This leads on in the surah to mention of the prophets Ibrahim (Abraham), Musa (Moses), Isma‘il (Ishmael) and Idris (Enoch).

The prominent place which Maryam occupies alongside the prophets in the Qur’an has led to vigorous debate among Muslim scholars about whether she also has the status of a prophet. Those who disagree point to Yusuf 12:109 and Al-Nahl 16:43, which suggest that prophets are men: and cite also the requirement of physical purity, which would be broken when she menstruates. Some prefer to just give Maryam an exalted position along with Sara and the mother of Moses, as muhaddathat (women spoken to by angels).

The Muslim mystic Ibn al-‘Arabi (1165-1240) intriguingly taught that Adam was really the first female, for Eve was born from his inside, an act which was repeated by the second Adam, Mary, in generating Jesus.

Whether prophet or muhaddatha, Maryam mother of ‘Isa is highly regarded by Muslims. I have known some Muslim friends who join in the Orthodox Church three-day fast before the day of Mary, or have pictures of her in their homes. Maryam shows the significant status a woman may have in the Muslim community, even beyond Muhammad’s wives. So she offers the basis for conversation with our Muslim friends about possibilities for the place of women in God’s plan, as receptors of his message and purpose.

In the Bible, the books of Ruth and of Esther form part of what is known as the ‘five scrolls’, together with Song of Songs, Ecclesiastes, and Lamentations, which are read at Jewish feasts instead of being part of the yearly lectionary. Ruth is read at Feast of Weeks (Pentecost), which is linked with the barley harvest, and the giving of the law at Sinai. And Esther is read at Purim, the feast instituted at the conclusion of that book. However their significance in the wider spread of the Bible is less appreciated. They stand as a counterpoint to the history of the people of Israel as they settled in the land God promised them. That history is divided into two sections, the time of the judges, and the monarchy that followed.

The book of Judges begins with Joshua leading the people into the land. It goes on to recount the story of succeeding judges who led the people. The account is a spiral down into disobedience, which is marked in part by the treatment of women. It ends with the terrifying story of the rape and murder of the Levite’s concubine, and almost total fratricide of tribe of Benjamin. The book concludes with a sorrowful statement of a people descended into complete anarchy.

In those days there was no king in Israel; all the people did what was right in their own eyes.[i]

The books of 1 & 2 Samuel, 1 & 2 Kings and 1 & 2 Chronicles continue the history of the Hebrew people. Their demand for a monarchy leads to the election of Saul as king. The monarchy reaches its high point with David, followed by the glories of Solomon’s reign. And the history continues with fluctuations but overall decline, which led ultimately to first Israel and then Judah being defeated and taken into captivity away from their land.

The people of Israel sinned against the Lord their God who had brought them up out of the land of Egypt: so Israel was exiled from their own land to Assyria to this day.[ii]

Jerusalem and Judah so angered the Lord that he expelled them from his presence. … So Judah went into exile out of its land.[iii]

Each of the books of Ruth and Esther forms a counterpart to histories of national disobedience and decline. Ruth’s story is set in a village, amid agricultural seasons. The story of Esther is set in the central palace of an empire ruled over by Xerxes (Ahasuerus), which stretched over 127 provinces from India to Ethiopia. Each woman is a stranger in the land where her story is told. And in the face of the dramatic history of national decline and disobedience, God’s covenant faithfulness to his people is demonstrated through the faithfulness of two women. As they are caught in the vicissitudes of famine, war and displacement, they act with faith, obedience and extraordinary courage in the cultural and historical situations in which they found themselves.

The stories of Ruth and Esther encourage us to realise that God is still fulfilling his redemptive purposes, even in the face of what seems overwhelming turning away from God and his ways. That redemptive action can be played out in the lives of individual people, individual women, even sometimes against national narratives of disaster.

The books of Ruth and Esther invite us into conversation with Muslim women about their response to God’s call to faithfulness in their lives. However small or impotent they may feel, whether central or peripheral to places of political power, women can be witness to and an important part of God’s great story and redeeming action in history, even in the face of national rejection or disaster.

Together, these three women who name portions of the Holy Books, invite us into conversations across Christian and Muslim traditions, about the place and significance of women in God’s purposes and in the history of their peoples.